The bald eagle is a really really cool bird, and not just because they’re a national symbol. They’re huge, they are just impressive. [Kevin McGowan, Cornell Lab of Ornithology] I’m Kevin McGowan I am a professional ornithologist and an all-around that bird nut. This is a very neat scene in Alaska of bald eagles adults and young glaucous-winged gulls, maybe a glaucous gull there too, and northwestern crows all of which are coming together. There are two primary reasons why birds get together in big groups in one small area. The first is that it’s protection against predators, or safety in numbers. It’s better to to be with somebody else if there’s a potential predator out there. The second explanation, most common reason, for getting together is food, and that’s clearly what’s going on here. Here comes one of my favorite guys walking into the scene. This happens to be a northwestern crow. The crows act for the big predators like jackals do for lions, that is they are very interested in the predators because they know that they are a potential source of food. They were walking around the edges, picking up little bits as they could, but they’re always watching. Like there he just jumped, that eagle made a move the crow didn’t like. The crow is not exactly scared of the eagle, but it’s like paying attention to traffic. If you if you don’t pay attention you can get hurt, but as long as you’re paying attention then everything’s cool. The crow’s got an interesting task. The eagle was just eating, and he doesn’t really care what’s going on, but the, the crows are paying attention to the eagle so they don’t get hurt. They’re paying attention to the food, trying to find a piece that they can actually eat, but they’re also paying attention to each other. When you’re the lowest on the totem pole, the smallest bird on the beach, you really do need to be paying attention to the big birds as well as your own species. Because these crows are social, they do interact with each other and they do pay attention to who has priority and who you are in the social system. I was waiting for one of the crows to go around behind the eagle and pull on its tail, which is a standard pro tactic to try to get a big predator to give way on the food, but they didn’t seem to need to do that. This pile of food apparently is big enough, and the access to it’s big enough that wasn’t a problem. You can see they aren’t really that concerned with each other. They’re watching the eagle because nobody trusts an eagle. For good reason, that’s a big bill.

Why do animals get together in large numbers? Often it’s about food. Dr. Kevin McGowan describes the feeding behaviors of Bald Eagles and Northwestern Crows on a crowded beach near Homer, Alaska. Watch as the crows jockey for position at carcasses paying close attention to the movements of the eagles and fellow crows. The keen observational skills of the crows sometimes win them a tasty morsel. Dr. McGowan is the instructor of the Cornell Lab’s online courses in bird ID and behavior. 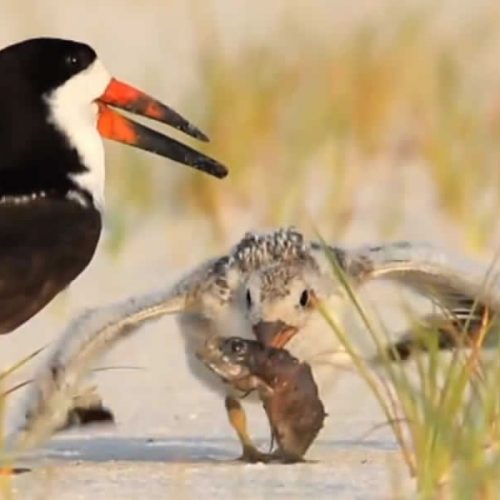