[A bower on the forest floor is visible. A female satin bowerbird flies in, then lands on the ground in the bower. A male satin bowerbird comes in with a white object in his beak. He shakes his head around, and quivers his wings. He tosses the object, then retrieves it. He moves closer to the female. He shakes his head again, walks past the female, and bobs his tail. He turns to face her again, shakes his head, then spreads his wing up and out several times while making a buzzing sound. He walks back and forth, repeating this display, and sometimes changing which wing he stretches out. The female hops away. He releases the object and hops away in a different direction.] [Explore MacaulayLibrary.org]

Male Satin Bowerbirds attract mates by building a bower, a structure made of twigs and decorated with objects from around the forest. The bower is not a nest; its sole purpose is to allow a male to show off his building skills. A well constructed bower is so crucial to gaining mates that male bowerbirds sometimes resort to stealing building materials from neighboring males. Here, a female Satin Bowerbird stands in the center of a bower and watches a male displaying. 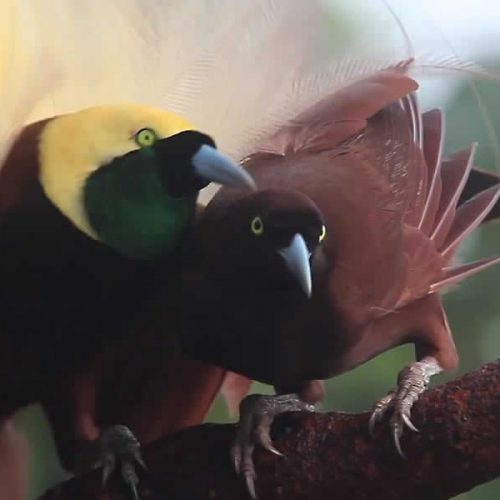 Behavior
For Birds-of-Paradise, Life's a Stage 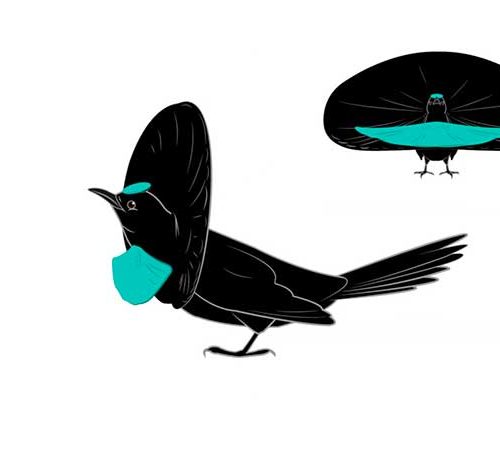