Explore this sample lesson on the Swainson’s Hawk from Be a Better Birder: Hawk and Raptor Identification. It’s just one of the 34 species covered in the self-paced online course.

[Kevin McGowan] Swainson’s Hawk is a bird of the open grasslands of the West. It’s only rarely found east of the Mississippi. The Swainson’s Hawk breeds across Canada, down to the southern US, and it winters in the South American grasslands and the pampas. Because they’re birds of open country, they do a lot of foraging from the air and from perches. This is a common roadside-post hawk in Western North America.

This is a medium-sized hawk. It has a stout body and broad wings, but the wings are slightly pointed, usually with one feather longest. Notice there is no secondary bulge. When they soar, they hold their wingtips up a little bit in just a slight dihedral or V-shape. Watch the bird as it soars. You can see that it holds its wingtips slightly up. That’s helpful for distinguishing this bird from Ferruginous or Red-tailed hawks.

The tail is light with multiple thin dark bands, one darker and broader near the tail tip. The light form is distinctive, with a dark hood and white throat.

When they’re perched, you can see a lot of variation. The light phase can have a dark hood and mostly white belly. Some individuals have additional markings on the belly, or they can be all dark.

The white chin can be variable as well. In some individuals, it’s restricted to a small patch under the bill, or it can extend down onto the chest. Notice they’ve got very prominent yellow legs, so that distinguishes them from the Rough-legged Hawk and the Ferruginous Hawk.

Juveniles have streaked underparts with large spotting on the breast. They also have very neatly marked back feathers. When you look at the face of these young hawks, you can see that they have a dark mark we call a malar streak or a mustache that comes down the side of their cheek. A number of juvenile hawks show markings here. The Swainson’s Hawk has an unusual pattern. It’s like the malar streak leaks down onto the chest and connects with the chest streaking. The pattern is variable, and juvenile Broad-winged and Gray hawks have this “leaky” malar streak too, but I think it’s most distinctive in juvenile Swainson’s Hawks.
End of transcript

Discover the key field marks that will help you identify the Swainson’s Hawk whether it’s perched or flying overhead.

These are the species commonly confused with the Swainson’s Hawk:

Bird Academy has developed a unique approach to learning bird identification. Our exclusive SnapID tool lets you practice identifying birds in all different postures and lighting conditions and builds your confidence for the field.

With SnapID, you get a chance to build up your own mental image of each bird for your brain to tuck away and reference later. If you pause on each pair of photos after you’ve chosen an answer and ask yourself, “What field mark did I use on that one?” you’ll quickly get a sense of which keys to ID are most helpful for you. Remember that each time you hit Play Again, you have new photo matchups to practice on. 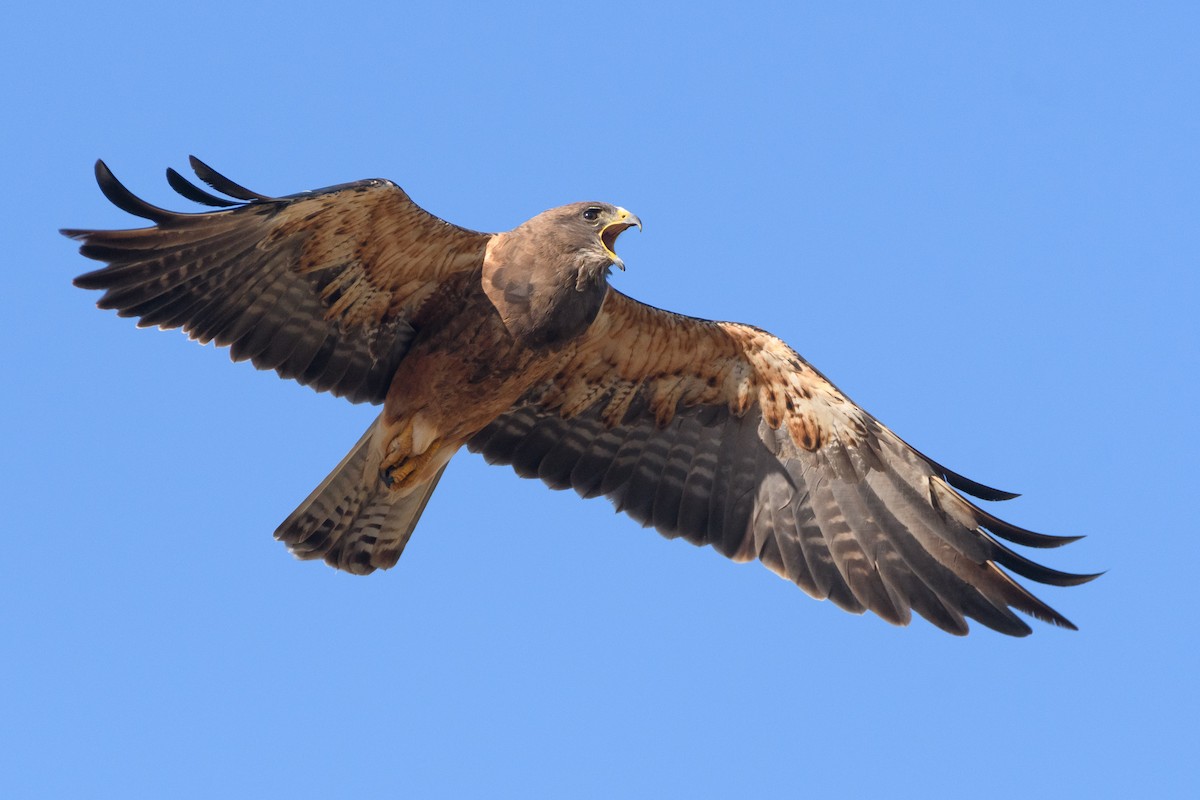 Thanks for previewing content from Hawk and Raptor Identification. The self-paced course offers materials like this for all 34 raptors species in the U.S. and Canada. Plus tips and techniques to build your confidence.

Enroll Now or Give as a Gift