Behind the Scenes of Birds Got Swing

Last April, just as the birds were flowing into Central Park on their spring migration, I had the privilege of joining jazz composer and avid birder Maria Schneider at the New York City apartment of world-class vocalist Theo Bleckmann, as he challenged some of the world’s most musical birds to a sing-off. Theo’s vast repertoire of vocal techniques made him the ideal choice for this project, which had grown out of Bird Academy creator Mya Thompson’s curiosity about how closely a human vocalist could match bird song. With his versatile voice, and the occasional extra octave granted by his soundboard, Theo took on whichever bird song Maria played for him. Approaching each vocalization much like a piece of music, the professional musicians identified tritonestritonea musical interval composed of three whole steps, also referred to as an augmented fourth or a diminished fifth, e.g., F-B, glottal stopsglottal stopssounds created by releasing the airstream after completely closing the throat, particularly the glottis, swing rhythms, and baroque ornaments. We listened in awe as the two playfully delighted in the vocal performances of Maria’s favorite birds.

After successfully tackling half a dozen different bird species from the American Bittern to the White-throated Sparrow, Maria proposed a new challenge: recreating a dawn chorus. Using his audio equipment, Theo concluded the day by recording and looping dozens of whistles, calls, and songs, forming a forest of birds from all across the world and inventing some of his own design. As Theo constructed his choir one layer at a time, I marveled at the vast array of sounds he was able to create simply by manipulating the shape of his mouth.

When I got back to the Cornell Lab of Ornithology, I was eager to plug Theo’s bird songs into Raven, the audio analysis software that creates visual representations of sound known as spectrogramsspectrograma graph displaying the changes in pitch (along the y-axis) and loudness (in color intensity) over time (along the x-axis), and compare them to those of the songs of the actual birds. Not surprisingly, given Theo’s mastery of pitch and tone, the lowest or fundamental frequency of each song strongly resembled one another. This is far more difficult than it may appear, as most bird songs don’t conform to the same intervals used in western music. I’d heard how good he was in person, and now I was able to see the evidence visualized.

You can compare the spectrograms for yourself

Then looking more closely, I noticed an interesting difference. Theo’s voice on the spectrogram showed more harmonicsharmonicscomponent frequencies found in regular intervals above the base frequency that make up the full sound than the bird voices did, except when he was whistling the sparrow. Several studies have been done to explain the lack of harmonics in the clear, whistle like songs of some birds. Recent research has found that in many bird species the source sounds produced by the bird voice box contain multiple frequencies and are rich in harmonics, much like Theo’s singing. In birds, however, these overtones are filtered out before the vocalization radiates out as a “pure tone,” though the physical mechanism of this filter is poorly understood.1

As a biology major with a keen interest in singing, I have long appreciated the complexity of bird song. Witnessing a singer as gifted as Theo taking on the challenge of mimicking these songs—often needing to slow it to half speed to compete—brought home to me the amazing vocal abilities of birds.

Read about and download the free sound visualization software.

Annalyse Moskeland is an intern with All About Bird Biology. When she is not studying biology, you can often find her rehearsing for her next voice recital or behind Cornell’s Ornithology Laboratory photographing wildlife. 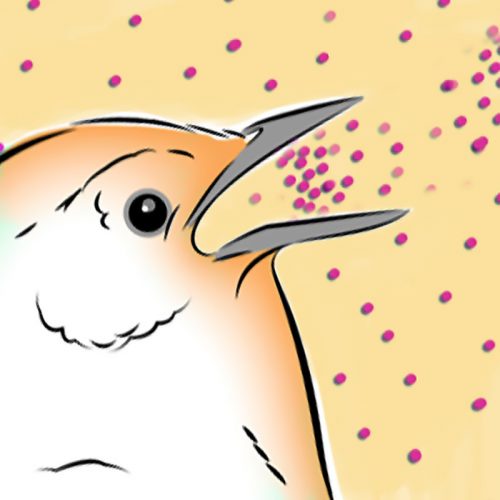