[Birds Got Swing: A Musical Experiment, Matching the human voice to bird song] [Featuring Theo Bleckmann & Maria Schneider] [Maria Schneider, Composer, Avid Birder] So, one of my favorite things about this time of year is all the birds are coming north and that thing of when you go out in the morning and you hear the first bird wake up  [Theo Bleckmann, Composer/Singer] and then all come into a chorus, and they call it the dawn chorus, and it is like a symphony of birdsong. — [Theo] What I love about it is that you hear it but you don’t necessarily see the sound source, you don’t see the birds so you experience birds mostly through sound. — [Maria] When I started really birding more, it crept into my music, so I wrote this piece Cerulean Skies that I play a bird call that I blow out through my nose. — [Theo] I love looping bird sounds and just bringing nature into a performance space. Not specific birds, but just bird calls that I remember, or bird calls I just invent. — [Maria] So we’ve prepared some songs from the very vast Macaulay Library. I think it might be nice to get you to imitate some of those songs. I want to hear you imitate the American Bittern, because to me that sounds a little like a toilet plunger. — [Theo] That’s fly! Okay. — [Maria] So okay let’s do our first challenge here. A bird called the Common Potoo, from Costa Rica. Okay, so here he goes. [Maria plays the Common Potoo sound, then Theo imitates it] [(sung at half speed, one octave lower), (playback sped up)] — [Maria] That’s really good! That’s very raspy at the end. You’re going to find yourself a mate there! This one I like cuz it’s kinda from home, Minnnesota. [Maria plays the American Bittern sound, then Theo imitates it] — [Theo] There’s like a wind sound in there. There’s so much ghooo, ghooo, it’s so toilet plunger, ha ha! — [Maria] Once you tune into this world, you can’t tune it out. [White-throated Sparrow] [Maria plays the white-throated sparrow sound] Do you hear the swing on that? — [Theo] Yeah. — [Maria] Isn’t that amazing? — [Theo] Yeah. Can you slow that down? — [Maria] Um, sure. [Theo imitates the white-throated sparrow] — [Maria] This bird right now in Central Park, they come through in droves, and everybody thinks they’re so common that they’re uninteresting, but because they swing I like them. — [Theo] Bee, bee, beebadee beebadee beebadee. — [Maria] That’s you. That’s really good, I’m telling you, I would think you were a White-throated Sparrow. — [Theo] I got another bird as a friend. I think what makes the bird atmosphere so wonderful for us to listen to is because there’s so much detail in it. It’s not just one bird doing the same thing, but there’s all these different, you know, shapes. A variety. It’s incredible. — [Maria] There’s the White-throated Sparrow swinging. [Produced by Mya Thompson, Cornell Lab of Ornithology; Bird Song Recordists Paul Schwartz, Gregory Budney, William Gunn] [Directed & Edited by Noelia Santos; Assistant Editor: Lisa Madison; Cinematographer: Colin Nusbaum; Assistant Camera/Sound: Matt Reilly] [Photo Credits Melissa Groo, Dani Gurgel, Oliver Heisch, Wagner Machado Carlos Lemes; Bird Footage Eric Liner, Lang Elliott] [Music “Cerulean Skies” Courtesy Maria Schneider/ArtistShare, “At the River” Courtesy Theo Bleckmann/Winter & Winter] [Explore Maria’s music: www.mariaschneider.com; Explore Theo’s music: www.theobleckmann.com; Try it yourself! Explore macaulaylibrary.org]

What happens when a jazz composer challenges a vocal virtuoso to match the voices of some of her favorite birds? Serious fun.

Join Grammy-recognized artists Maria Schneider and Theo Bleckmann in their musical experiment to help us tune in to nature’s music—from the melodious to the downright weird. You’ll never think of a sparrow or a toilet plunger in the same way again. Then go behind the scenes with our blog post featuring Theo’s extraordinary, imaginary dawn chorus. Explore more of Maria’s favorite bird songs and try singing like a bird yourself with the Birds Got Swing playlist from the Macaulay Library archive. 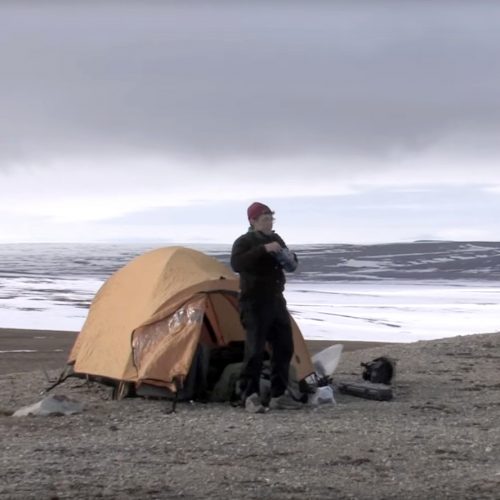