[Nate Senner, Part 2: The Tools I Use] I’m here at the Churchill Northern Study Center in Churchill, Manitoba, which is on the west coast of Hudson Bay in northern Canada, and my crew and I are here to place British Antarctic Survey geolocation data loggers on the legs of Hudsonian godwits so that we can follow their migration over the next couple years from here to the southern tip of South America. As fancy as a data logger sounds, it’s actually this tiny machine. This machine weighs 1.4 grams, which is roughly the weight of a paperclip. This machine, when we attach it to the leg of the godwit, will subsequently take the sunrise and sunset and timing of peak noon each day over the course of those two years, and that will give us two location positions every day. And those will be the data that we use to plot out the migration and of Hudsonian godwits. We’re going to put that data logger just on a small little flag roughly the same size of the data logger, and this will go on to the leg of the godwits. So once we’ve recaptured a godwit and taken the, the data logger off of it, we need to hook it up to a computer so that we can download the data, and then filter it onto a map and see where the godwits have been going over the past year. So we’re going to go do that right now in the lab. Alright so we’re in the lab here with the data logger from individual LP that we captured. So you can see that this data logger has been through some weathering and some salt. And we’ve hooked it up to the computer already using this little black box that a, the British Antarctic Survey has made for specifically this purpose. And the first thing that pops up is all of this data. It’s just a whole string of letters and numbers, and to be completely honest with you I have absolutely no idea what those letters, numbers signify, but each of these lines is 10 minutes of data. So that the data logger takes a light reading every 10 minutes and spews out 55,000 of these per year. So we’ve got that data already, so we’ve got all this raw data, and then the next thing we have to do is what’s called transition editing, and what that does is this program takes all of that raw data and it reads out so that it shows us the light and dark cycles for each day from the last year. Finally though after we, we’ve gone through that entire process we’re left with this, our beautiful map of where godwit LP went starting on June, June 22nd of last year and going through June thirtieth of this year. And if you are able to look closely here you can see that it spent a whole lot of time here in Churchill, Manitoba last June, and you can see that it spent quite a bit of time here at Churchill and then a bit more time here at James Bay, and then flew all the way down here to northern Argentina in the Buenos Aires province, where it spent the winter before flying nonstop back here to northern Mexico, spend a couple days there, and then began moving up through the central US, stopping in Kansas and somewhere in the Dakotas, and then again in Saskatchewan or Manitoba before finally returning here to Churchill sometime in early June. So a pretty epic journey all catalogued by this little machine. [Produced by the Cornell Lab of Ornithology and Hobart and William Smith Colleges through the Crossing Boundaries Project] 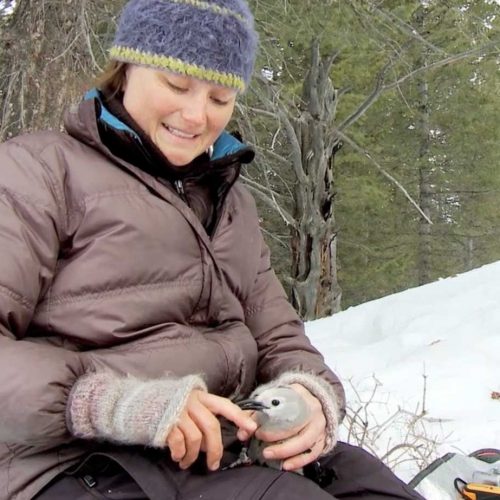